In-Kind Donations 101: What You Need to Know 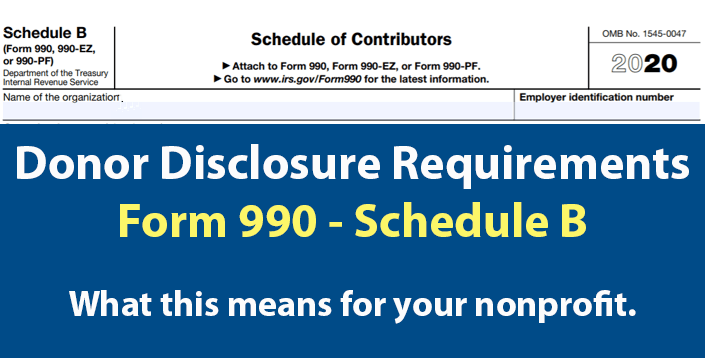 Charitable organizations that solicit contributions in California are required to disclose the identities of their major donors with the office of the Attorney General. Nonprofit organizations are required to register prior to soliciting in California and thereafter renew their charitable registrations annually §§12585(a), 12586(a). As part of the renewal process, nonprofits are required to submit copies of their IRS Form 990, which provides information about their mission, leadership, and finances, including an unredacted copy of Schedule B attachment of Form 990 to satisfy state disclosure requirements.

The Form 990 Schedule B which is at the center of Americans For Prosperity Foundation vs Bonta requires charitable organizations to disclose the names and addresses of major donors who have contributed more than $5,000 in a particular year. California contends that having this information readily available furthers its interest in policing unethical practices by certain nonprofit organizations.

Should Nonprofit Organizations Disclose Their Donors?

The petitioners, Americans for Prosperity Foundation and the Thomas More Law Center, both public charities, tax-exempted under section 501(c) of the Internal Revenue Code have solicited funds from Californians since 2001. By and large, both organizations have renewed their California Charitable Solicitation Registration and filed copies of their Form 990s, as required by Cal. Code Regs., tit. 11, §301. These organizations, however, have declined or filed only redacted versions of their Schedule B or donor information, stating that full disclosure will be a violation of their First Amendment rights and the right of their donors. Consequently, donors are less likely to contribute towards their cause for fear of reprisals. The petitioners both argued that the obligation to disclose Schedule B to the California AG was unconstitutional on its face as it applied to them.

The California Attorney General argued that an un-redacted Schedule B improves the efficiency and efficacy in protecting the public from improper and fraudulent activities by charities soliciting charitable donations.

The Supreme Court struck down the California donor disclosure law as facially unconditional. Drawing from precedent stretching back to the 1950s, notably NAACP vs Alabama – NAACP v. Alabama ex rel. Patterson, 357 U. S. 449, 462, when the then Alabama AG sought to obtain information about the membership of NAACP, the Supreme Court concluded that forced disclosures could infringe on an organization’s free association and free speech rights. The Court recognizes that the privacy of association is protected under the First Amendment, which includes the right to associate anonymously.

According to the Supreme Court, California failed to provide compelling evidence as to how donor information listed on Schedule B of Form 990 is vital to consumer protection against unethical nonprofit practices. In other words, the Court articulated an ‘exacting scrutiny” standard which requires “a substantial relation between the disclosure requirement and a sufficiently important governmental interest,” Doe v. Reed, 561 U.S. 186, 196. In other words, under exacting scrutiny, the governmental regulations must be narrowly tailored but need not be the least speech-restrictive means available.

The Court acknowledged the importance of California’s interest in preventing charitable fraud and self-dealing, however the enormous amount of information collected through Schedule B does not form an integral part of California’s fraud detection efforts. It added that evidence provided by California’s AG was not compelling enough to support the claim that alternative means of obtaining Schedule B information, such as via a subpoena or audit, are inefficient and ineffective compared to available information on Schedule B.

What This Means for Your Nonprofit

Reader, whether this is a victory for proponents of free speech or an increase in the risk of charitable fraud and abuse, is up to you. Our focus is the change in donor disclosure laws in states that require it such as New York, New Jersey, California,  and Hawaii. In light of the Court’s decision, the New York Attorney General’s Charities Bureau just put out a statement suspending its collection of IRS Form 990 Schedule B.

“The New York Attorney General’s Charities Bureau has suspended is collection of IRS Form 990 Schedule Bs while we review any amendments that may be necessary to our policies, procedures and forms in order to comply with the U.S. Supreme Court’s decision in Americans for Prosperity Foundation v. Bonta (594 U.S.__, 2021). Effective immediately, charities’ annual filings will no longer require disclosure information that identifies donors. Any notices that charities have received regarding any deficiency due to missing or incomplete Schedule Bs are no longer operative as to such deficiency, and annual filings will no longer be considered deficient in such regard.”

Going forward, it is unlikely that any challenge to the Supreme Court decision will be important enough to justify excessive broad disclosure requirements. Whether this comes to pass or not, nonprofit organizations are advised to continue maintaining sufficient records of donors and keep up to date with any changes to donor-disclosure requirements. In fact, states that tackle charity fraud through other means, such as state investigations, are mostly unaffected by this ruling. Furthermore, if your nonprofit organization was holding back on registering to solicit contributions in California, New York, Hawaii, and New Jersey, you should reconsider in light of this historic Supreme Court decision.

Note that this does not mean that your nonprofit organization is not required to provide this information to the IRS. The IRS still mandates nonprofit organizations to disclose information of certain donors. This Supreme Court decision only addresses the constitutionality of state law. Specifically, the states of New York, New Jersey, and Hawaii that have similar disclosure laws to that of California. Whether this decision opens the door for future challenges of the IRS donor disclosure requirements or even future challenges to other state reporting requirements, only time shall tell. If you have any questions on how best to proceed, please do not hesitate to contact us.